Breast Implant Placement: Above or Below the Muscle 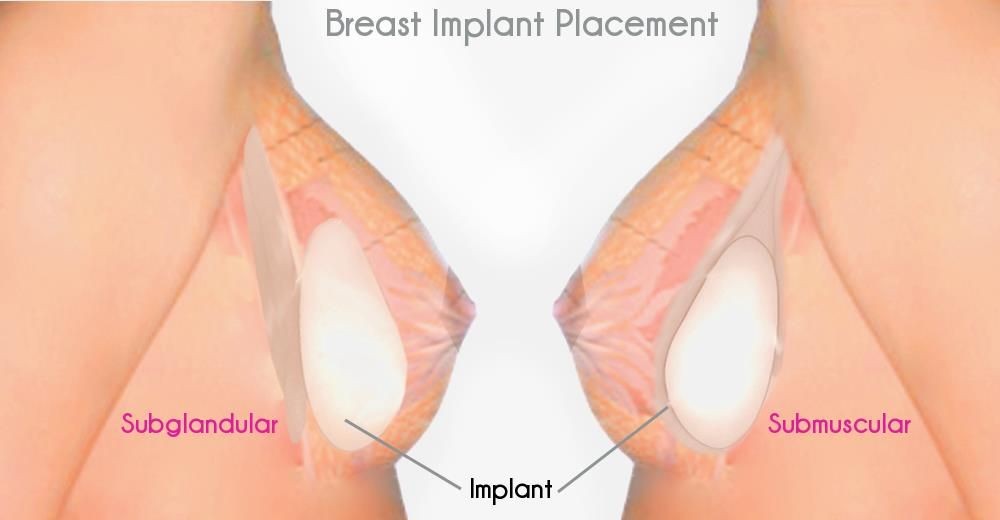 In general, the benefits of submuscular/dual plane breast implant placement are:

Therefore, Dr. Feldman firmly believes that submuscular/dual plane implant placement is the best choice for overall patient health and optimal breast aesthetics. Addtionaly, he does not believe there to be any lasting benefit of subglandular (or sub fascial) placement. If your breasts are entirely below the muscle he will recommend a mastopexy (lift), not subglandular placement, to take advantage of the benefits mentioned above regarding submuscular/dual plane implant placement.

A submuscular implant looks better, feels softer for longer and doesn’t interfere with mammograms, giving you the best chance at early breast cancer detection and highest cure rate should it develop. However, it’s not always that simple. Many times the bottom edge of the pectoralis major muscle ends higher than your natural breast crease. If the placement of breast implants lies completely under the muscle it “rides high” and delivers a less than ideal aesthetic result, with your natural breast “falling off” the front of the implant. Therefore, to prevent that, Dr. Feldman frequently utilizes a dual plane implant placement. This means as much of the upper portion of the implant is under the muscle, for all the reasons listed above, but a small portion of the implant “peeks” out from under the muscle so the implant is nearly centered under the nipple. There are different degrees of dual plane release (I, II, III) but Dr. Feldman will do as little a release as possible to achieve an optimal aesthetic result, thereby leaving maximum muscle coverage.

Just about the only downside to putting implants under the muscle is what's called an animation deformity. An animation deformity is an expectation, not complication, with submuscular or dual plane implant placement. Every woman, worldwide, with breast implants placed under the muscle, regardless of surgeon, has some widening and distortion of her cleavage when flexing/engaging her pectoralis muscle. This change in breast and cleavage appearance with muscle contraction is known as animation deformity. In fact, when a patient can't remember where her implants were placed, Dr. Feldman will have her flex her muscle and watch her cleavage as a diagnostic test! How noticable this change with flexion is depends on how strong the pectorlis muscle is and where the bottom of the muscle was located relative to the natural breast crease. Ultimately, some distortion of cleavage, a few percent of the time when you're flexing your muscle, is far better than a permanent "bolted on" uber fake look, with visible 360 degrees rippling 100% of the time. Therefore, an animation deformity is a worthy tradeoff for all the abvementioned benefits of submuscular implant placement.

During your breast augmentation consultation Dr. Feldman will discuss breast implant placement options, and during the exam he will determine where your pectoralis major muscle ends compared to your breast fold to estimate the level of dual plane release required to optimize your breast appearance.

Learn more about the incisions to place your implant here!

THE ALLERGAN RECALL OF BIOCELL TEXTURED IMPLANTS AND TISSUE EXPANDERS

This July Allergan announced that it was recalling BIOCELL® Textured Breast Implants and Tissue Expanders. With the recent coverage of breast implant-associated anaplastic large cell lymphoma (BIA-ALCL) in the news, some of our patients are searching for more information about the safety of breast implants. Learn more about the Allergan recall, Bancroft Feldman's policy on using textured implants, and what our patients' options are.

Do you price match competitors?

Why does my anatomy affect price?

What Our Patients Are Saying

"Dr. Feldman is a great surgeon and makes you feel very comfortable. I looked online for several surgeons and after visiting for my first consultation, Dr. Feldman and all the staff made me feel very comfortable, so I chose to have my Breast Augmentation at Feldman Plastic Surgery. Overall, I would rate my final result as a 10, would recommend them to my friends, and will return to Dr. Feldman if I decide to have additional surgery.

I would like to thank all the staff for their great service! All the staff is awesome, super informative, and helpful!"

"I just wanted to tell all of you thank you again.  And by the way I have the best looking boobs ever.  Beyond thrilled!"

"I selected Feldman Plastic Surgery for my breast augmentation based on these patient testimonials, and other reviews on the internet. The staff and Dr. Feldman are very friendly, listened to my concerns before surgery, explained how the procedure would be handled, and ultimately delivered a "10" result! I now reccomend them to all of my friends, and would not hesitate to return to their office if I decided to have additional surgery."

Why did I develop a rash after surgery?

When can I return to work (or school) after breast augmentation?

How long after my breast augmentation surgery should I wait to have sex?

What happens if you get a cold/flu after surgery?

I just had surgery and my breast is making a burping or farting noise. It feels squishy, crunchy and like there are air bubbles around the top, sides or bottom. Is this normal?